One Challenge’s sports ministry dove into a new kind of trip this summer. Led by Dave, assistant director of Sports Ambassadors, a team of eight men and women hit beaches of Barcelona to play beach volleyball and share the love of Christ. 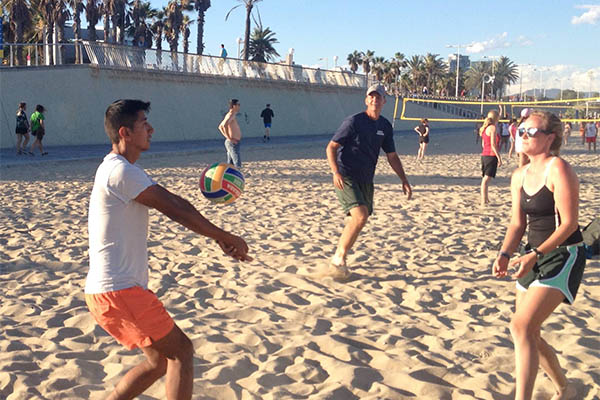 “This trip was far different than any SA team I’ve been on in 30 years,” Dave says. “We didn’t have a ‘half-time’ program or a standard time of someone sharing testimony and the gospel. Instead, our ministry consisted of praying each day for God to lead us to the people he was drawing to Himself, setting up nets and playing, seeing God bring people our way, developing relationships, and engaging in spiritual conversations as opposed to preaching.”

The team engaged with people from Spain, but as Barcelona is a vacation destination, they also met people from other European countries, the Middle East, South America, North America, and Asia. For Scott, a team member, a highlight was sharing life and the gospel with a young man from Kuwait. 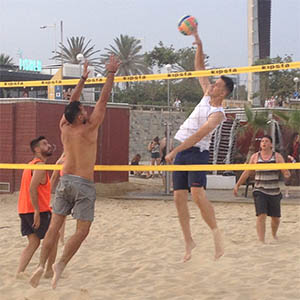 “As I shared the gospel with him he did become interested, and returned for two days after we originally met. He even felt comfortable enough to join us for our Bible Study and share time one afternoon before we went to the beach!” Scott says. “His last night I really became burdened for him to have a Bible and the only I had was my own personal Bible, so I debated a little, and then decided to give him that before we parted ways.”

Witnessing in a Post-Modern Society

In a post-modern city like Barcelona, where many people are atheist or agnostic, this approach to open conversation and relationship seemed to be the right approach. “We saw many engage in Kingdom conversations and keep coming back to our group multiple days. It was a blast to be part of God’s obvious work in many hearts,” Dave says. 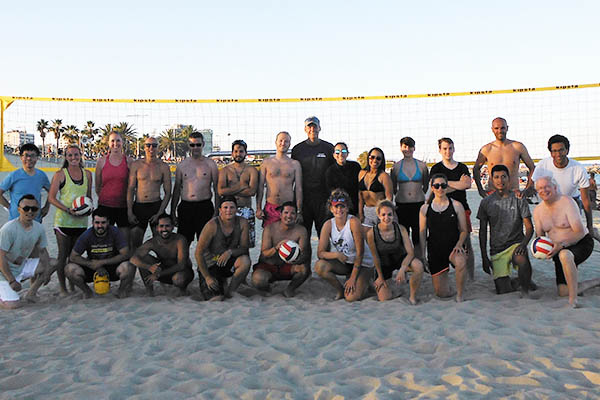 Dave says he see this approach being effective in the future of sports ministry as it can be applicable to ministry in the U.S. as well. “The people we engaged with were primarily young, post-modern, atheist or agnostic, and lonely people. Yet, what a joy to love on them, share Jesus, plant and/or water Kingdom seeds in their lives,” Dave says.

Alyssa, a member of the team, shared a moment where she and another player, Hannah, had the opportunity to share the gospel. B., a Muslim from Barcelona, helped translate the gospel for Hannah and Alyssa as they spoke using the wordless bracelet (a common evangelistic tool) to a man on the beach. 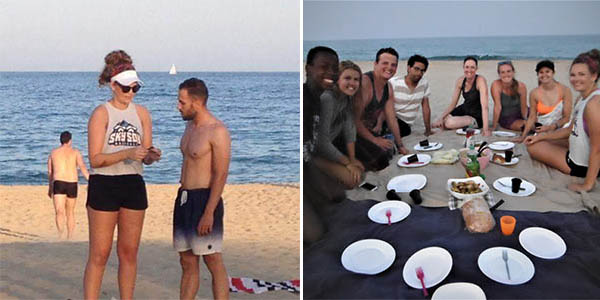 “As Hannah explained the message of the bracelet, the gospel, to the man who had asked for one, I stood by her side and silently prayed not only for her words to touch the heart of who she shared it with (and that his heart would be opened to the message), but also for B. This was an unbeliever translating the gospel message to another unbeliever!” Alyssa says.

When Alyssa shared the moment with local partner Alfredo, he said he was eager to grow his relationship with B. and see how the Lord directs his heart.

Partnering with local believer Alfredo was critical to the trip, not only in its execution but sustainability. “Alfredo has a passion to see the believers who play beach volleyball in Barcelona do so for Kingdom purposes to make friends with the many unreached and unengaged that flock to the beaches to play,” Dave says. “As we saw some of the believers there join us, we could see them catching the vision to do this and continue.” 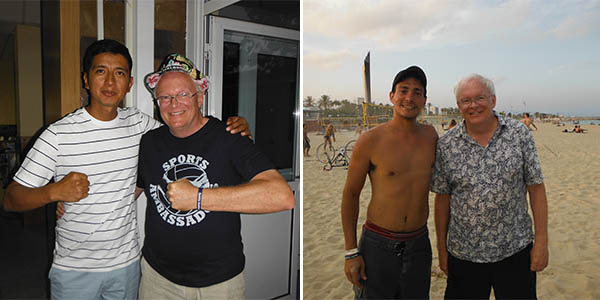 An open invitation exists for Sports Ambassadors to continue this partnership in Barcelona. Dave says he hopes to help Alfredo create a network of Discovery Bible Studies and expand disciple-making movement in the city. “Since nobody will go to a church, the idea is to bring the Word to the beach rather than trying to get people into a building. Bring the Word to the beach and bring it in a way they can discover for themselves rather than being preached at,” Dave says. “Alfredo was excited about this. Thus, I see groups returning and incorporating this into what we do.”

Sports Ministries
One Challenge is an international mission sending agency empowering local church ministry in more than 100 countries around the world. One Challenge uses sports as a vehicle to create opportunities for sharing the gospel, planting churches, helping churches engage their communities, and developing disciple-making networks. Contact the OC Sports Ambassadors at SA@oci.org or go their Sports Ambassadors Facebook page.