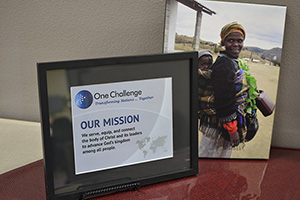 One Challenge is privileged to have gifted men and women serve on the U.S. OC Board of Directors. Not only do these people put the Lord first in their own lives, but they also seek the Holy Spirit’s wisdom in how they should guide One Challenge. Most are leaders in their fields of work, whether that is business, law, finance, missions, or any other area.

A New Year and New Board Roles

At the September 2016 meetings, the OC Board welcomed three new board members. Michele Wilson received the baton of board leadership from Dale Micetic. Michele started her 30-year journey with OC as a mission worker. Then she continued as a friend of the mission (while serving in other organizations). She became a board member in 2012.

Michele says she is truly humbled by the request to fill the role of board chair. “I hope to keep humanity in it. It won’t be a procedural role, but will focus on listening to what God is telling us as a whole board,” she says. Michele also looks forward to working more closely with Dean and Kathie. “I can’t think of a better couple to work with.”

Each new board member brings different backgrounds and expertise. This invites greater depth and knowledge to discussions and decisions.

From MK to Board Member

Dale Keyes, who was elected in September, is the first One Challenge mission kid (MK) to serve on the OC Board. He grew up in Brazil with his parents Bill and Laurie and his siblings. Being an MK does bring a new perspective to the group. “Hopefully it allows me to be sensitive to issues of a family on the field, sensitive to being a MK, and transitioning back to the U.S.,” he says. Dale’s multi-national background and cultural adaptability is fruitfully applied in his profession which involves extensive overseas work.

Serving in the Field and Now on the Board

New board member Murray Moerman serves within the Global Church Planting Network (GCPN), sharing a long history with OC. Murray says giving his valuable time and energy to the OC board revolves around One Challenge’s Barnabas spirit. OC comes alongside the church with its macro vision of spreading the gospel. “I believe OC can be one of the most leveraged mission agencies with the greatest impact through the smallest footprint (in terms) of personnel,” he says.

All three new members excel in their own areas of ministry expertise … widely different. But sharing one thing in common … they desire to see the Great Commission advanced through the careful stewardship of the people and resources of One Challenge.

Please pray for the One Challenge Board of Directors as each member seeks to follow Jesus wholeheartedly and maximize OC’s impact globally.