Murray, an OC Global Alliance worker coming from Outreach Canada, loves to train and coach national teams for church planting processes which take John 17 (the unity of the Body of Christ in mission) as seriously as Matthew 28 (the mission of making disciples of all nations/people groups) in ‘whole nation’ strategies. God is using Murray’s passion to serve the kingdom though the Global Church Planting Network (GCPN).

The purpose of GCPN is to connect people and resources to accelerate church planting among all the peoples, languages, nations, cities, and villages of the world, with the expectation of communities being transformed to the Glory of God. Their Vision and Mission: GCPN is foundationally committed to the completion of Christ’s Great Commission. We value all primary instruments accomplishing this central redemptive purpose of God by multiplying disciple-makers and disciple-making communities. These include prayer, research, pioneer church planting among unreached people groups, saturation church planting among least reached people groups, and whole nation initiatives. Our prayer is to see every people group discipled to its fringes by Christ-like communities of believers. For more: https://www.gcpn.info

The complexities of the geo-political world can be viewed through many grids. GCPN attempts in 15 regions and several sub-regions to form resource teams to serve leaders in each country towards national initiatives and partnerships. 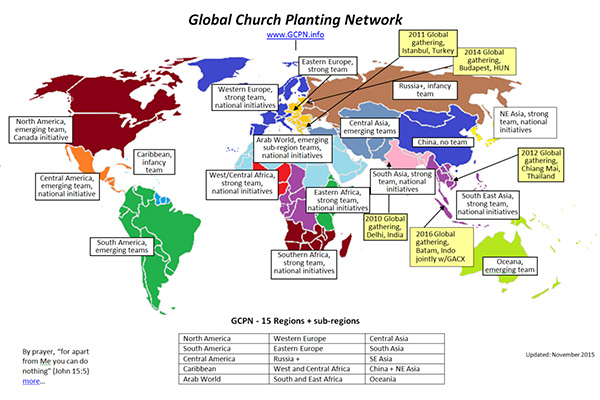 One might wonder how a task of this scope can be achieved. How does one find leaders and form resources teams for yet unreached areas? Murray, and his wife, Carol, tell how God is making it happen. They describe some recent developments in three different parts of the world.

Last year a mission worker and a Taiwanese leader gained broader vision when they participated in a GCPN global gathering of regional teams near Budapest. Follow-up included help from members of an OC research team who prepared national leaders with maps showing where the church has been making disciples effectively and where greater focus is needed.

In late Sept. the OC team convened about 80 Chinese denominational and agency leaders on the 150th anniversary of the arrival of protestant mission workers to the island. Murray was invited to provide training and assist in forming a team/partnership to set a national church planting goal and develop strategy to together accelerate church planting towards meeting their goal. One Taiwanese team is creatively planting what they call “7-11 churches,” established near 7-11 stores, meeting at odd times to benefit shift workers. Another plants what they call extension churches in businesses and workplaces. Increasingly ‘church’ is outside traditional structures.

The “regional” ideal we work and pray towards is to see national church planting process leaders in a growing number of countries collaborate to problem solve and spur one another on to greater fruitfulness, using a “peer-learning” model. The team in Western Europe is developing very well, with the number of nations involved this year growing from 8 to 17. Nearly 90 leaders from these nations met in Madrid at the end of September for three days of sharing, learning, prayer, and setting new objectives. We see the strong and gracious hand of God since the days of flying into the Frankfurt airport, meeting in a coffee shop with a handful of national leaders without leaving the airport, and flying back to England the same day. The morale among Western European leaders is the highest we’ve seen in the years we’ve been involved. There is a marked shift in the spiritual climate in Europe!

Between Taiwan and Madrid, Murray traveled to Romania to work with a team (including OC teammates) in early stages of a similar regional process to disciple more peoples to Christ in Eastern Europe. Only Romania has developed a full national process (which has planted many churches and become a global mission worker sending nation, mostly to Central Asia and India). Our prayer is that 12-15 April 2016, leaders from most of Eastern Europe will gather to be exposed to the vision of leading a national planting strategy. It will take time to develop trust and relationships, but God is at work.

(Components of a national process can be found at https://www.gcpn.info/home/regions/national-initiatives)

The most impactful thing we can all do is pray. https://www.gcpn.info/home/prayer

Perhaps you want to know more or get involved more deeply. The GCPN has a website with lots of information and links to reference material. https://www.gcpn.info/

Church Planting & Growth
One Challenge is an international mission sending agency empowering local church ministry in more than 100 countries around the world. We invest in people and opportunities that enable churches to be planted, thrive, grow, and multiply. When invited by local leaders, OC conducts training for church planters and those interested in learning about disciple-making movements.