The United States has the largest foreign-born population in the world, according to a 2012 census 40.7 million people in the U.S. were foreign born. What does this mean for One Challenge? It means the nations are coming to us. In response, OC formed One Challenge USA in 2005, led by OC worker Bob R. But due to the changing times and the fast pace of American society, One Challenge USA recently changed their name to Near Frontiers.

“The pace of our times means that we may only have a moment to communicate who we are and what we do. We loved our former name, One Challenge USA, because it tied us closely to our parent organization. However, we wanted a name that says something, at a glance, about what we do,” Bob says. “Given the fact that the U.S. is the leading receiver nation of international migrants by a huge margin, we have been led of God to sharpen our focus on helping the church enter this amazing mission field. We want to be a group that still reaches those who have never heard the gospel, but the irony is that those frontier people are not all far away anymore. With globalization, many who once were far off are now close by, in our towns and neighborhoods. Hence the new name, Near Frontiers.”

Change in Name but Not in Purpose

The relationship with One Challenge has not changed, but the new name gives a quick glance at the vision of Near Frontiers. But like OC, Near Frontiers centers on partnership and desires to reach the nations for Christ.
“We partner with churches, other organizations, individuals, and immigrants. There are two inflows of immigrants to America: those who need the gospel, and those who already have it. Of the latter, we need to partner with them and minister in mutuality,” Bob says.

Near Frontiers tagline is “Partnering to love the world next door.” And each team member is actively doing this in their area. They do this is three major ways: serving the underserved, embracing all cultures, and welcoming nations.

One couple (pictured) lives and serves in a trailer park of working poor in Colorado, where there are both Caucasian and Hispanic peoples. Their desire is to live out the gospel through developing leadership in youth. 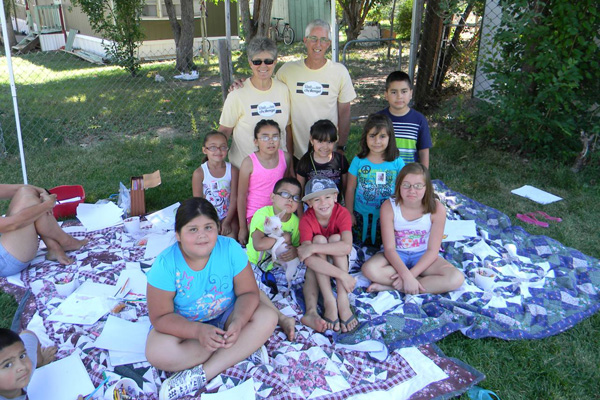 Another family lives near a large university in Southern California, reaching out to international students, many of whom come from Muslim and Hindu backgrounds. The hope is they find Jesus here and take their faith home. The whole team seeks to “help believers see that our churches should reflect the diversity of the kingdom of God and not be content to worship with people who are culturally similar. We believe every church should be on the journey toward intercultural unity,” Bob says.

Prayer, Finances, and Resources for Workers

Near Frontiers seeks the Lord’s discernment in all of their steps. “We are committed to prayerful discernment of God’s direction so, as people desire to pray with us, ask God to give us clear leading to the ministry pathways He has for us, and the people He has to partner with us,” Bob says.

Near Frontiers believes in God’s provision for the ministry. “We are also committed to trusting God for whatever financial resources He wants us to have, and then functioning with contentment within that supply. As God touches someone’s heart to share financially in our calling, we see that as God’s provision,” Bob says.

“We also have resources for believers who want to join this ministry on the near frontier. One resource is a 6-week study for a class or small group. Called ‘Passport to Friendship,’ this training helps believers take their first steps in making a friend for Christ cross-culturally,” Bob says.

We are all called to the Great Commission. If Near Frontiers interests you, let us know at mobilization@oci.org. You may also visit their website at www.NearFrontiers.org.