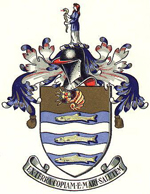 “NEWLY appointed mayor Vic Walker has pledged to serve the community and promote ‘sunny Worthing’ during his year in office,” says the Worthing Herald, 13 June 2014 edition. “Mr Walker and his wife Rosemary were sworn-in as mayor and mayoress on Friday at the annual Mayor Making at Worthing Town Hall.” Vic is now officially the Mayor of the Borough of Worthing 2014-2015 (in West Sussex, England). 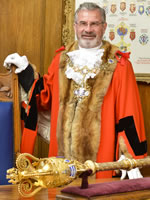 The article continues: “Dressed in the official robes, Mr Walker told councillors, ex members, honorary aldermen, MPs and guests it was a ‘privilege’ to be selected for the role. He said: ‘I came to Worthing 15 years ago. I was told by someone that Worthing was God’s waiting room and that it would be slow for me, and I wouldn’t settle. I love it here and always will. There is so much going on in Worthing.’”

He added: “My vision is to continue to promote and serve this community, to encourage people to be caring and respect one another, to encourage good business, and to continue to bring awareness in and outside of the borough that we are sunny Worthing by the sea, a forward-thinking, clean-living and caring community.”

From the Worthing Daily, “Vic has always had a strong commitment to community social matters and is a committed lifelong Christian. In Plymouth Vic was involved with help in the community, the homeless and other community volunteer schemes. When Vic moved to Worthing, he became a senior member of Worthing Elim Church. Vic has been actively involved in Christian short-term mission work, taking him to Romania and Rwanda in various project initiatives. Over three years ago Vic with two others started a charity shop in Worthing called Faith Through Action. This charity has helped individuals in the Worthing community, as well as project work in Rwanda and Bosnia. Vic is also a director on the board of an international Christian organization called One Challenge International UK, www.onechallenge.org.uk.”

Vic’s mayoral charities for the year are One Challenge UK, Worthing Churches Homeless Project, Faith Through Action and Go Youth (for all young people of Worthing including those with Autism and additional needs). The charities reflect Vic’s strong Christian faith.

Tony Ford with OC UK says, “Vic Walker joined the Board of OC UK in 2009. We have appreciated his energy and enthusiasm ever since. In 2011 Vic traveled to Brazil for the OC Global Alliance meetings which only increased his commitment to OC ministry. Vic has been the driver behind local events for UK Christian leaders.”

Vic’s wife Rosemary initially met Vic both in his capacity on the Board of One Challenge and also in helping OC international friends find local accommodation. Vic and Rosemary were married in June 2013 and both attend the Elim Fellowship.

Renée Grubb, an OC UK worker from the U.S. says: “Vic Walker was the bright smile and warm hug greeting us to Worthing (England) life. He is absolutely winsome with effervescent energy flowing from his joyful faith and his advocate servant heart! He displays Jesus in skin!”

“Vic has said that he is more excited about being on the OC board than being mayor!,” says OC’s Stan Downes with the US-MC and formerly an OC Area Director in Europe. “Please join us in praying for Vic and Rosemary this year as they serve their local community during this term as Mayor.”

For more information about the work of OC UK, see their website: www.onechallenge.org.uk or download a brochure:
OC UK brochure
OC pastor brochure