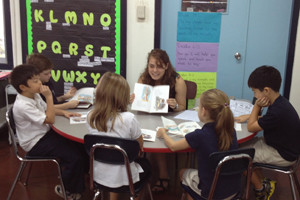 “You know that you love what you do when you laugh your way through most days,” Kelsie Carlson writes. She is a first-year teacher at Faith Academy in Manila, Philippines teaching second grade. Kelsie is no stranger to living overseas. She grew up in Johannesburg, South Africa where her parents served with OC International for over 20 years. People like Kelsie, children of mission workers, are affectionately called MKs, which is short of mission worker kid. Since one of OC International’s values is family, taking care of OC MKs by promoting self-care, debriefing, and quality education is essential to the mission. It is no wonder Kelsie decided to become a teacher for other MKs—she understands what it is to experience life as one.

Kelsie’s classroom is more international than most of us could ever imagine. “I have 27 second graders this year who represent eight nations—America, Canada, Switzerland, Australia, England, China, South Korea, and the Philippines. I will be working in some time for students to share lives and stories each week. I also have eight English-language learners who will be interesting to make adjustments for,” she writes in her blog. A unifying quality of most MKs is sharing life experiences. There are not many other children who can understand what it means to be from one country, live in another country, and attend school with peers from around the world. 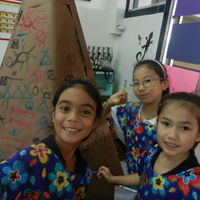 Sometimes, however, these cultural and language differences can create some unique challenges for Kelsie. “Having a classroom with children from many nations and languages makes class a little interesting,” Kelsie explains. “I had my students write about their favorite memory from second grade so far. I looked up and saw most of my Korean students (nine of them), as well as my Swiss student, over by the wall where the posters of our previously studied Bible verses are. I was so confused as to what they were copying down. I then realized that they were writing down their favorite Bible MEMORY verse from the year. After a good laugh I tried to re-explain and tell them to write about their favorite story that happened to them this year. I watched as a Korean boy darted for a book (story) that he had read this year. My whole class was so confused. I had my American, Canadian, British and Australian students trying to explain to their peers what the assignment was about … and what a memory is … Ah, language barriers, gotta love them.” 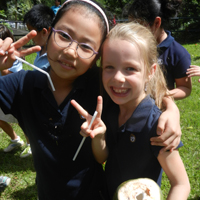 She also told this story on her blog, “One of my second graders likes to smell my hair while the class is lining up. He once turned to the little boy behind him and told him that my hair smelt like strawberries and that he should pick one (luckily he decided otherwise). Another time, one of my little Korean boys asked me if I was drinking coffee. He then said, ‘Um, aren’t you too young to be drinking coffee?’ After I told him that I am an adult, which means I am allowed to drink coffee, he said, ‘Well I don’t think you are old enough, your hair isn’t gray.’ Ah the things kids say and do! It’s the little things that count.”

That is a theme for Kelsie this school year: the little things. “It has been fun to focus on the small things each day,” Kelsie said. “The things that bring laughter to my classroom—student comments, interactions, and the things they do. They never cease to crack me up!” 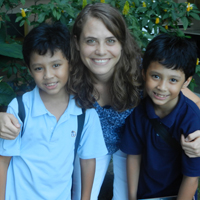 It is not just the small things that she has been experiencing, however. Living in the tropics, Kelsie finds valuable science and social studies lessons right outside her classroom door. “My class was learning about the Philippines,” Kelsie writes. “To make learning come alive, I took my second graders out to a coconut palm tree and organized some harvesting. We got to watch as one of the grounds men swiftly scaled the long trunk, disappeared in to the leaves, whipped out his machete and hacked down enough coconuts for my entire class! It sure put my classroom management to the test as I tried to keep my overly excited boys away from the machetes as the grounds men chopped open the coconuts for us to eat. What an experience to sit around holding coconuts, sipping on milk, and eating the meat as we talked about each part of the coconut!” Learning opportunities like this don’t come around every day!

Overall, Kelsie knows the importance of being more than just a teacher. “Each day brings surprises, laughter, and learning,” she writes. “I feel so blessed to be in the Philippines, to be able to pray for and with my students, and to build in to their lives.” An MK now teaching other MKs understands the value of prayer and loving her students. These stories will stay with her and her students for years to come!

If you want to read more about Kelsie’s journey in the Philippines please visit her blog at kelsieinthephilippines.blogspot.com.