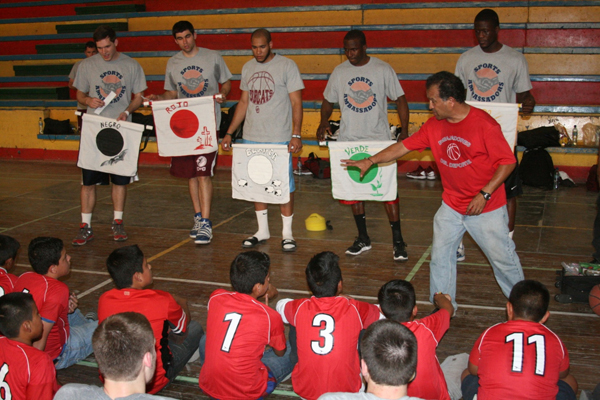 Elementary students as well as high school teens attended the basketball clinics and games. Plus 500 adults watched them play the Guatemala National team on the first night with Dami laying it in at the buzzer for a one point win.

“Being around you makes me smile.” So said one Salvadoran young man. 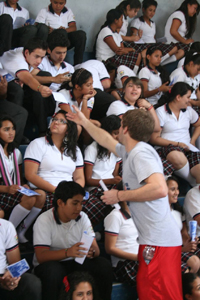 Coach Shepherd reflected on the time saying it was more than he had hoped it would be. He especially loved seeing the hands go up saying they wanted to trust Christ as Savior after Louis used five team members to present Christ and the gospel message at each half-time and clinic.

Pete (6’5 sophomore) said this was a life-changing trip and was thankful Sports Ambassadors (SA) included him in this endeavor.

JT (injured guard) was amazed at how basketball and a few hours interacting with the students caused many to hunger spiritually for a walk with God.

Nathane (6’7 junior center) was thrilled to work with the church and see the members loving God and wanting to serve Him just like many in his home church.

Taylor (junior shooting guard) appreciated Termite and his attitude with the little he had.

Dami (senior point guard) was struck by the poverty and conditions and realized he would never be the same after this trip. He loved the relationships started and hopes they will continue.

Todd (assistant coach and pastor) was challenged to be as content as many he saw that had little yet were joyous and at peace. 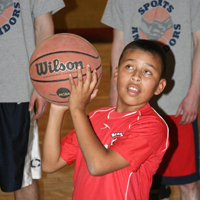 Jaime and Louis are planning to return to the town and lead a three-day session with the church.
The pastor will bring all the Sunday school teachers this time and have Louis present his material enabling these leaders to impact and equip the youth with songs, skits, lessons, and the Word. Louis gave a glimpse of what he does at the half-time programs. The SA played their role of standing with Louis and following his lead in the songs and skits. One player would share his personal story and then Louis would have the five team members say the Spanish verse that goes with the color card they were holding and Louis would explain what it meant. (Basically it was the Wordless Book presenting the gospel message).

Please pray for these 15 guys as they return to campus. After this experience, may they understand what their role is.