As a mission organization, One Challenge is committed to the Great Commission given by Jesus in Matthew 28:19-20, “Go therefore and make disciples of all nations, baptizing them in the name of the Father and of the Son and of the Holy Spirit, and teaching them to obey everything that I have commanded you.” (NRSV) The launch of OC’s newest team, Missional Challenge, is a reflection of this command and an expression of how to encourage and equip every believer to be on mission with Jesus by making disciples who will then go and make disciples. Check out their website for more information, www.missionalchallenge.com

Missional Challenge officially launched in February 2013, with Dave and Deanne DeVries at the team’s helm. When Dave and Deanne joined OC in 2005, their ministry developed around training and coaching church planters all over the U.S. As Missional Challenge continues forward, Dave says he sees the day-to-day function of this ministry being similar, training and coaching, but with the primary focus on advancing missional movements globally, not only in the U.S. “Even as we have launched Missional Challenge as a team to focus on advancing missional movements globally and to see disciple making and church planting happen, it’s at the core of what OC has been, and in our minds, will continue to be in the future; it’s at the very core,” Dave says. “We are excited to do our part as a team to help advance disciple making movements and also to help other fields that are already engaged (in disciple-making movements), and to learn from each other and collaborate in whatever ways we can.”

Dave sees this as a global vision. In fact, shortly after the launch in February, mission workers in Eastern Europe, Kirk and his wife, joined the Missional Challenge team. “Over the last four years, God has increasingly involved my wife and I in advancing disciple making movements and training others to do the same throughout Eastern Europe,” Kirk says. “We recognized that Missional Challenge was God’s invitation for us to build on this foundation and seize new opportunities to help multiply disciple-making disciples throughout Europe.” In the last year, Kirk has seen amazing strides in Europe. “This year we are blessed to be equipping disciple-making teams who are working among six distinct ethno-religious groups throughout four European countries,” he said. “Our hope is found in Paul’s prayer request to the Thessalonians: that the message of the Lord would spread rapidly and be honored, just as it was among them (2 Thessalonians 3:1).”

At the core of Missional Challenge is the belief that every follower of Jesus is commanded to make disciples who make disciples who make disciples. Dave says that in the contemporary church in the U.S. this command has been altered; most believers see their part in discipleship as inviting people to church and letting the church leaders take it over from there. “The focus has become, go to church and it’s all about church attendance in a lot of places, especially in America,” Dave says. “Discipleship often looks like hearing good sermons and the way you disciple someone is you invite them to church so they can also experience the gospel through good teaching. It ends up that we have a lot of people in our churches that aren’t actually engaged in making disciples, or even thinking about making disciples who will go on to make disciples.” Dave acknowledges that not every church in the U.S. follows this pattern, but many of them do.

In working with church planters and beginning to communicate the need for disciple-making movements, Dave developed The Multiplication Cycle™ to highlight the key principles on which Missional Challenge is based. He says most Christians and churches would agree that the place to start is with Jesus’ mission. Where he differs from a lot church planters is where to go from there. Many church planters think they need to get “leaders and a team together first and then they need to launch worship services. 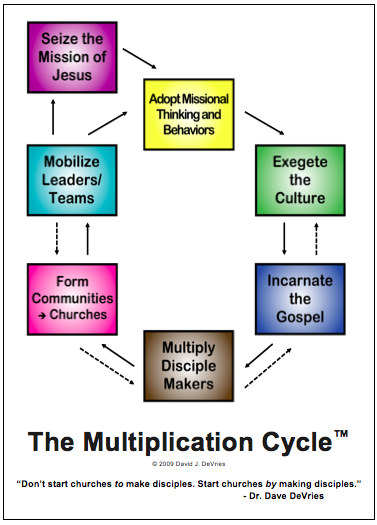 They hope as they do that they’ll see disciples come out of that who will go and incarnate the gospel and understand the culture and make disciples who make disciples.” The problem is that the process often breaks down between starting services and making disciples. The circle never completes. Dave teaches that the cycle needs to go the opposite direction: after joining Jesus on mission, then start thinking as a mission worker, understand the culture, incarnate the gospel, begin making disciples and then church plants will organically grow out of disciple-making. “It’s out of those (disciple-making) communities that churches will be birthed. What happens is that if we try to start churches to make disciples, it falls apart; but if we focus on first making disciples, churches are the natural result,” Dave says. “Jesus never said, ‘Go start churches.’ He said, ‘Go make disciples.’ Churches come as a result of obedience to the Great Commission. When churches are birthed as a result of disciple making, then you will be automatically raising up leaders and teams to be sent out to do this process over and over again.”

Making disciples is something every believer can be engaged in today, and Dave sees three areas where you can start:
1) Embracing the cross
2) Experiencing community and
3) Engaging the culture in your own zip code

Missional Challenge is a small team, just two couples, but it has a large vision. “Our focus is really coming alongside (believers, leaders, and churches) and asking: how can we help every believer engage in the mission of Jesus?” Dave says. We want “to do our part to see a shift in the focus of local churches to actually become movements of disciple makers.”