On Monday morning, March 18th at the US-MC chapel meeting, Dick McCaskill, Chairman of the Presidential Search Committee, joyfully announced the Board’s unanimous approval of the election of Dean Carlson as our next OC US-MC president. Friday, March 15th, the day the decision was made, “was a great day of rejoicing,” said Dick. Greg Gripentrog’s fourth and final three-year term as OC’s US-MC President carries through December of 2014. Dean will take office as President on January 1, 2015. “And so we have an exciting time over the next 21 months of transition,” Dick shared. The Board has made the Executive Committees available to Greg and by extension to Dean as they plan and develop the transition period.

Greg and Dean enter this time of transition in a very pro-active way, grateful for the opportunity to navigate a leadership handoff with careful thought and the anticipation of going from strength to strength. Dean will have until April 2014 to finish well as VP Global Ministries and work on a succession plan. The following months will be devoted to personal preparation and coming alongside Greg. During this transition time, Greg and Denyse will seek to understand how they will continue to serve the Lord within OC. “Using the example of a relay race,” said Dick McCaskill, “that baton needs to go from the firm grip of one to the firm grip of the other over that period of time.”

Dean is a graduate of Northwest Nazarene University (1983) and pursued his missiological education at Fuller School of Intercultural Studies, earning a Master of Divinity in Cross-Cultural Studies in 1987 and a Doctor of Ministry in Global Ministries in 2003.

Dean and Kathie’s history with OC began in 1989, when they moved to Mbabane, Swaziland, to minister on OC International’s Southern Africa Regional Team. Dean served as the field director for 14 years, during which he worked with a wide spectrum of denominations and organizations to train leaders and formulate the launch of cooperative national church planting strategies in Zimbabwe (involving 60 denominations), Swaziland (involving the three major church associations) and South Africa. 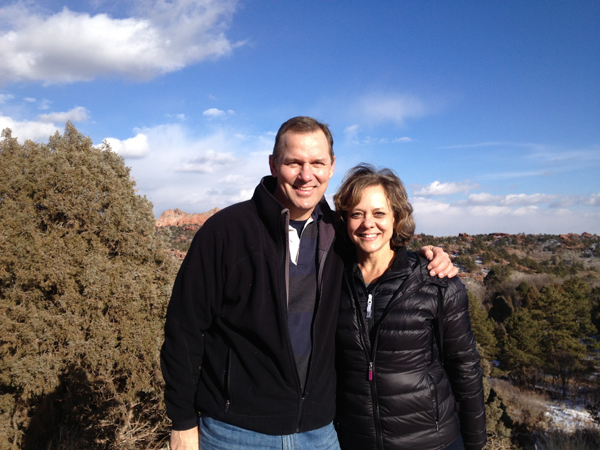 In 2005, Dean was asked to serve as the OC Africa Area Director with responsibility to oversee three fields and to engage in networking across the continent. Simultaneously, he was asked by the Movement for African National Initiatives (MANI) to serve as the Southern Africa Regional Coordinator with responsibility to stimulate and strengthen national movements for church planting and missions in ten nations. MANI is an African-originated initiative seeking to influence the whole Body of Christ for the Great Commission through national initiatives in many African countries. After the fall of Apartheid, Dean and his team were invited by the Evangelical Alliance of South Africa (TEASA) to move to Johannesburg (2006) to help serve denominations across the country.

In June 2008, the Carlson family moved to Colorado Springs where Dean now serves as the Vice-President of Global Ministries for OC International. In this role, he guides the ministries of 300 mission workers impacting 95 nations and seeks to build bridges between organizations and movements for the Great Commission.

On the day of the announcement to the US-MC, Dean and Kathie shared some of their personal journey over several months asking God for His direction in the decision. “The Lord has been working with us deeply. This was not an easy decision for us; it was not a quick decision. When Dick first approached us in September, I thought, ‘Lord what are you asking of us?’ And we entered into a profound discernment process. It has been 22 years now that I’ve had the opportunity to serve as a line leader in OC, throughout that time Ephesians 4:10 has meant a lot to me. It says: ‘As a prisoner of the Lord I urge you to live a life worthy of the calling you have received.’ In this journey over the last few months the Lord has called us to surrender, he’s called us to see what He’s doing, and he’s called us to serve.” Dean and Kathie accepted humbly and joyfully saying, “We’ll learn from Scripture, we’ll learn from the Global South, and we will move forward together in a way that will bring God the glory.”