We are now living in an amazing era with a great desire and hope of completing the Great Commission in our generation, particularly through strategic saturation church planting (SCP) and indigenous church planting movements (CPM). Murray Moerman, facilitator of the Global Church Planting Network (GCPN), tells the story of how the GCPN started and shares some of its latest news and prayers.

How did it begin?

“Well, the idea for the GCPN really began with a conversation on an airplane,” says Murray. “That conversation led to another in a living room in London, then we “tested” some ideas with a dozen leaders in Worthing in February 2009. We met for 2 days – church planting leaders representing 9 organizations from 6 major regions of the world. Seeking the Lord’s direction for the future of global church planting, we wrestled through these questions: ‘What are the best things going on in church planting currently? What are the biggest roadblocks, the challenges? What needs to be overcome?’ We agreed on some very simple principles, having to do with engaging with national leaders, asking questions instead of bringing answers, being relationally based, not being organization to organization, but person to person. A small team was mandated to organize a global gathering to advance this approach. The first took place in India in 2010, with a second in Turkey in 2011, and the most recent one in Thailand in 2012.”

What’s the purpose of GCPN?

The purpose is comprehensive. GCPN connects people and resources to accelerate church planting among all peoples, languages, nations, cities, and villages of the world, with the expectation of communities being transformed to the Glory of God. GCPN seeks to do this through resource teams serving national leaders through training in SCP, church planting movements, coaching, strategic information, and more.

“In the 15 regions of the world, essentially we are attempting to gather strategic-thinking church planting leaders,” says Murray. “Then ask those leaders to develop teams that will in turn interact with national leaders and say, ‘How can we help you?’ So the story, the pictures of the GCPN, look different in every context – we’re not bringing a package to Central Asia and Africa that looks the same. And ultimately every nation in the world will have a team of leaders within that country, doing church planting movements, researching, setting goals and working towards discipling entire nations together. OC is contributing significantly in giving initial leadership to a number of teams in these various regions, and we’re collaborating with other organizations as well.” 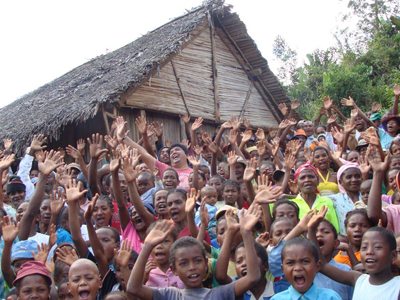 Here’s an example… A South African, Ethiopian and a native of Madagascar met at a GCPN gathering in Delhi (2010) and formed a partnership to train CPM workers in the Madagascar rainforest. 50 workers were trained and three generations of church planters from the harvest have now established small churches in 1500 villages. There are still 4500 villages to go but already the jungle is experiencing the transformation of the Gospel with fear of spirits melting away and cruel traditional practices falling into disuse.

What news and prayers?

“One of my prayer requests is that the GCPN will be as a much a prayer movement as planting movement,” says Murray, “because we recognize that this must come from God’s spirit and God’s power.”

To find out more about GCPN, go to their website at www.gcpn.info