Filipino Christians are overflowing their country’s borders to reach the world for Christ. Philippine Challenge (the name of the OC team in the Philippines) has been there working with church leaders for 60 years. According to a study by cultureright.com, the Philippines has the largest diaspora network in the world, with more than 11 million Filipinos living overseas. Rich Henderson, OC-U.S. field director for the Philippines team, shares an exciting statistic from Operation World. He says: “4,500 Filipino full-time mission workers and another 50,000 tentmaking mission workers are working outside of the Philippines sharing the gospel, planting churches and making disciples. Also an estimated 500,000 evangelical Filipino Christians are working outside the country.” 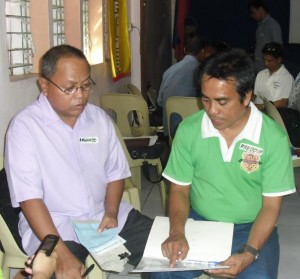 Today, the Philippines has over 50,000 churches; however, every barangay has not been reached yet. For the past seven years, Manuel Movido, a volunteer with Philippine Challenge, has been researching which barangays are without churches. It is estimated that there are still 23,000 barangays without an evangelical church. Manuel has no doubt that Filipino pastors can accomplish this goal. He says: “You cannot compete with Filipino pastors in church planting. We are the best, bar none.” This history of church planting and evangelical growth is a rich foundation for the out powering of Filipinos mission workers beyond the waters of the Philippine Sea.

Philippine Challenge has been sending mission workers to other countries since 2003. The Philippines officially became a mobilization center in 2010, with the formation of the OC Global Alliance. Currently, PC has 10 mission workers in three countries, with another six interns raising support and continuing training. “Our mission workers have been evangelists, teachers, professors, engineers, athletes and pastors,” says Rich. The success of the Philippines as a sending country, and as church planters within the country, centers on one key aspect – the Filipino people. “Filipinos are successful mission workers because they are friendly, easy going in their nature and fun loving people as a nation,” says Rich. “They are willing to adapt to different cultures and changes and are skilled in many different fields. Filipino people have easily adapted to different cultures around the world and have been able to take and share the gospel in places where Westerners are not able to go.”

The evangelical world in the Philippines is continuing to grow, and with that growth comes the desire to go, serve and be Christ among the nations of the world.